Mazec offers you handwriting input as an alternative to your keyboard within any app on your device.

If you want to write an email, make a social post or quickly jot your notes, mazec handwriting input technology offers you a speedy alternative to handwrite the message instead of using a keyboard.

The Mazec handwriting input app offers extremely accurate handwriting recognition and predictive text to intelligently guess your handwriting on the fly.
It even allows you to enrich the dictionary with your own favorite terms and phrases, or your favorite URL’s and email addresses.
Mazec Handwriting Input for iOS8 saves you time writing emails, notes and social posts.
Instead of fumbling with a keyboard (which often causes you to use both hands),
with mazec all input can be completed with the touch of a finger.
Mazec handwriting input provides handwriting conversion while you are on the go.
Its advanced technology is due to vast semantic databases built over MyScript, the world leader in handwriting recognition technology. 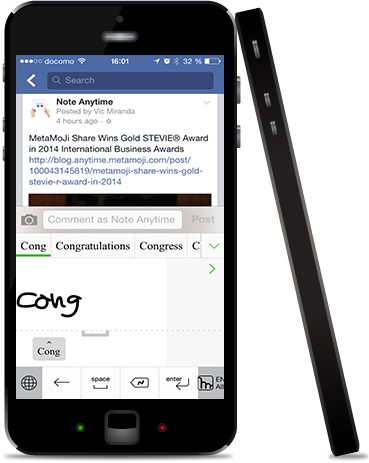 -One of a kind handwriting input technology

When combined with the vast libraries of words and phrases in the mazec semantic dictionaries, handwriting becomes a lightning fast alternative to keyboard, especially on iPhones.  MetaMoJi has also added a shrinked input area to take maximum advantage of writing space on iPhone 6 and iPhone 6 Plus, making handwriting input easier for both right and left handed people.

The mazec dictionaries are so accurate that they can even intelligently “learn” frequently used phrases automatically. You can also    ”teach”  mazec to memorize short sentences, such as “TYVM” to “Thank you very much” and allows you to customize the user dictionary to your own favorite phrases.

emoji graphics can be added on the fly

Mazec includes more than just emoticons, but over 100 selected Emojis in 12 categories. Just write “Emoji” or one of category name as “face”, “moon”, “animal” etc. , then the list of Emojis will pop up. Categories of Emojis include: Faces, Fingers, Weather, Moons, Animals, Hearts, Balls, Fruit, Flowers, Buildings, Trains and Cars

Because mazec is written as an input method to iOS8, it acts as an alternative keyboard within any application on the device that accepts input. Mazec makes writing emails, blogs and social posts quick and fun and saves you time. With the mazec Handwriting Input app, browsing the internet and conducting Google searches has never been easier. With mazec, it becomes extremely easy and quick to fill out webforms and critical documents online, thus saving time from printing PDF files and scanning to be sent back

There are 3 modes of operation in mazec: